For Your Entertainment: part II

HBO is planning a new drama series about a trans-masculine transition. Who else is worried about this?

“T” as the show is known, follows a person who is transitioning from female to male. The creators of the show are the same as those who created “In Treatment” an HBO show that surrounds sessions of psychotherapy. Charming. I’m surely looking forward to how  bunch of non-trans hollywood know-it-alls are going to portray us.

Now, maybe I’m being overly pessimistic.  Just because the popular media has a habit of portraying us as self-hating hideousos, lying tricksters, and fame-seeking sideshow acts doesn’t mean that this new portrayal will be a disaster… It just makes it highly probable.

As I wrote back in June about growing trans attention, I feel that sensationalizing difference is another form of societal oppression. Making a TV special or going on Oprah where no real information or acceptance is promoted is no different than displaying us in a cage for view. Of course I realize that tons of people and identities are put on display every day. That doesn’t make any one instance more or less acceptable. Most media representation isn’t about helping a movement, its so people can sit in front of their TV and say “Holy shit, what a freak. Glad I’m not like that.” Its so big-wig “non-profits” can get recognition by being seen as an authority as they slap a mental disorder on us. Or so a bunch of bored hipsters can ask invasive questions and claim us as friends for cool points. I fucking hate hipsters….

These people don’t care about us, they are working for their own interests. So, who’s out there working for us? It sure isn’t them. It has to be us. We have to make our own public image, and if people choose to be fascinated by us, we’ll know its because of our hot sexy fabulousness, not because of what Oprah says.

4 thoughts on “For Your Entertainment: part II”

This weekend I attended the Sex Education Youth Summit which the Ohio Advocates were helping Planned Parenthood organize. It was a great day and I met lots of inspirational youth.

I knew there was a reason I oved Sesame Street’s Bert and Ernie as a kid. Related 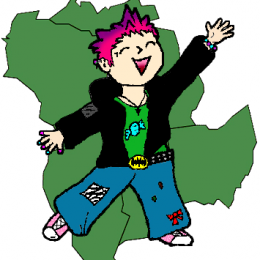 JAC Stringer, the commonly known as Midwest GenderQueer trans-genderqueer activist, writer, and performance artist is booking for this year’s tour! JAC Stringer, MSW, has been working as a community organizer,