Coming Out for Your Entertainment?

The newest trans-media craze has hit. A semi-celebrity, who I am not naming, has come out as trans and announced his transition. Clearly the announcement was made to circumvent a mass-media fest. In his announcement he also specifically requested privacy. Of course he’s not getting it. Who’s surprised?

I realize the media sensationalizes the most minimal things for entertainment. That said, I have found particular attention is paid to queer and trans concerns. The media either crucifies the person or tries to highlight how amazingly normal the person is (in effort to be supportive to the poor, gay soul). Who would ever think a queer person could be well-adjusted? Holy heterosexist, Batman!

In the case of this person coming out, some news articles have been surprisingly well written and mostly focused on actual trans issues. However, the majority are full of the expected trans-ignorant language like using the wrong pronoun and terms like “gender switching/swapping,” “Girl Boy,” “she/ he,” “it,” and my favorite-“wow.”

A person’s coming out story should not be a opportunity for public commentary and fascination, as if the person were growing a new limb. Being trans doesn’t make you magic. Believe me I wish it did, but it doesn’t. Yes, it is hard to come out and it is hard to transition. Yes, we are a greatly ignored population and there is little education about us. That doesn’t give anyone the right to turn us into a spectacle.

There is public habit of making representatives out of people just because they are different. There is no consent in this iconization, only the assumption that if you are different you must want to be talked about. So often marginalized populations are labeled, boxed, and then expected to present their experience for the sake of “educating” others. What people want isn’t education, its entertainment. When someone finds out I’m trans they don’t want to discuss gender theory with me. They want to know what my body looks like, how I have sex, and if I’ve had “the surgery.” They want to hear about how depressing my life is so they can feel like a supporter when they tell me how brave I am.

The reality is that I’m no braver than anyone else. I think that we all are brave for surviving in this fucked up world, queer or not. People need to look past the labels and see the person behind it. Sensationalizing those who are different is a form of societal oppression.

One thought on “Coming Out for Your Entertainment?”

Start a new turkey day tradition by adopting a turkey from a non-profit rescue farm! Visit Farm Sanctuary and sponsor a turkey this Thanksgiving! This year I adopted Bubbles! Related 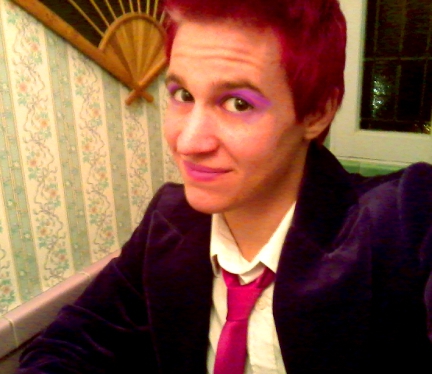 You all may know me to be a little on the… aggressive side when it comes to calling media and celebrities out on transphobic ignorance. Recently, I’ve been trying to go the more relaxed