01/15/201601/15/2016 JAC 0 Comments
The trans community has lost a talented, intelligent, and beautiful person. Bryn Kelly was an artist, a musician, a singer, an activist, a writer, a role model, a leader, a mentor, a friend… She cared strongly for others and was deeply loved by her communities.
*TW this post is a response to suicide and includes discussion/feelings about it. The content of this post may be triggering for anyone struggling with thoughts about suicide or self-harm. Please take care of yourself. <3*
Dearest Bryn, I was just thinking about you last week. I had randomly found a photo from the day we met. It was ten years ago but the memory is clear. You were so beautiful and I was so awkward. I was surprised you even acknowledged me but in your eyes, I was family. I felt immediately bonded to you. The reason we were different made us the same. It was my first Pride and though we were only a few years apart in age, you were so much older than me. I remember the novel freedom I felt, the type that only comes from being with your own kind. We were kids running on pavement, crossing through alleys and hanging in backyards. You said, “Let’s take a picture and I’m going to look sly in the background.”

I choose to remember you with this picture because of how much we loved it when it was first taken. I love the silly joy it represents. I love the two of us in our jean jackets. I felt like such a badass in that jacket, though few people agreed with me lol. You lovingly joked that even though you’d moved to New York, you still had enough Ohio in you to love your jean jacket. You told me about your hometown and said I’d be better off if I got out too. Bright eyed, I told you my plan to stay and make things better. I perfectly remember your emotional face and loaded voice when you said, “I think that’s great if you can manage to survive here.” I’d only been out a few months and I couldn’t comprehend the complexity of your emotions. You explained that someday I might have to leave to take care of myself but I didn’t believe you. I didn’t know I was sitting at a fire that had already burned you. For years now, we’ve both been living in that fire and we’ve both been burning up.
Every year or two we’d cross paths; we’d be on a panel, share a workshop, catch up in a conference room corner. Sometimes we’d talk about Ohio, or being trans, or femme, or artists but mostly we just talked to each other like we were people… people who maybe didn’t have lives clouded by oppression. I could see sad things behind your eyes; you could see sad things in mine. It was normalized. In the trans and queer community, we expect to see each other suffering and death, well it doesn’t surprise us. Despite all this, I’m always left in shock when one of us is suddenly gone. Processing the loss of a human being is a very strange thing. I don’t know how to recognize the disappearance of life. So much of our existence depends on what we conceive to be real. Dying doesn’t erase a person’s realness. I don’t know how to reconcile the difference between being alive and dead. It just comes down to how long it’s been since I’ve seen you. When I found out, I was overwhelmed with heartbreak. I’d well up in tears which would dry into momentary anger; repeat, repeat. I’m so fucking angry. I know that grief always comes with anger, but I believe there is a particular formula reserved for the oppressed. This didn’t happen by chance and it isn’t a coincidence that you are who you are, what you are, and that you are gone. This is the result of the way the world treats us.
I lost another red head in my life this past year: a young person I used to work for/with in Cincinnati. In personality and practice, she couldn’t have been more different from you, but she was one of us. The last time we spoke, she said she wanted to live a better life. I told her she was strong enough to do it. Within a year she was dead. Several people publicly blamed me for her death, claiming I hadn’t created enough resources for her. The fact is that there are not enough resources for any of us. We are not behind the wheel of this machine but we are inside it, each of us trying to slow it down if with nothing else, with the weight of our bodies – our existence. Is the weight of the living heavier than the dead? Some people say the soul weighs 21 grams but we are carrying more than our own souls. The tribal Elders talk about how Native people’s history is held in our bones. Research on historical trauma confirms that pain is not limited to one moment or even one lifetime. You and I, we are bearing a load passed down from our ancestors. Even if there is not a single other trans person in my family line, I am carrying the history of our people and so were you. If the weight is too heavy, I could never blame someone for putting it down. I know what it is like to be tired like that. I can try to carry some of that weight for them. I wish I could have carried some of that weight for you. We aren’t weak for struggling, we are human. Our bodies are not ecologically designed to sustain the emotional and physical torture of oppression. The fact that so many of us live so long is proof of how strong we are as a species and as a community. Sometimes I think that nothing I do will ever be enough. I just feel that there is nothing for me to do but to keep working, keep fighting… And I hate that no matter how hard I fight, I will never be able to save you. You’ve crossed over to a place I’m not yet allowed to go. It’s not your fault. I love you.
Once I called you a songbird and you laughed saying it was a first. When I think of you, I think of fiery red hair like a phoenix, 1950s dresses with cowgirl boots, cardigans and bluegrass notes… I think of Ohio and jean jackets. I admired you too much to relate to you, but I was proud we were both grown out of the same soil. We stretch our roots in search of stronger soil, cleaner water. You’ve grown so tall now, you’re in the sky. I’ll keep growing, working on the ground. I’ll survive here.

Please check out this scholarship in honor of Bryn.

Today, February 17, 2010, marks the 4 year Transiversary for o’l Midwest GenderQueer. It has been a long road, and will be longer still. I would like to take this 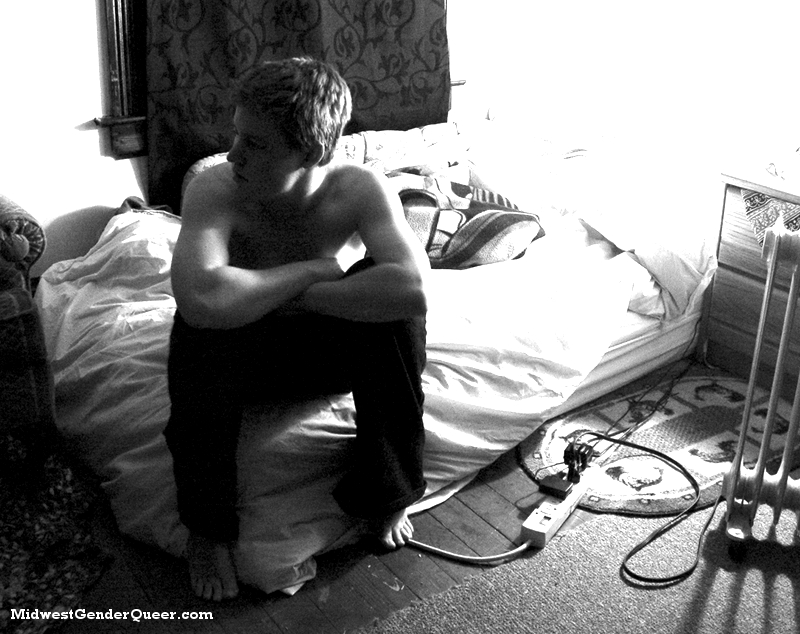 I read a quote that really moved me. It said  “self portraits (selfies) are often such an act of self preservation and resistance.” I take a lot of self portraits, and sometimes

As you may have noticed, this blog hasn’t been as active as it could be. The reason has been grad school, and holy hell has it been tough! As of