GenderQueer in the Midwest

You can also access the video on YouTube. Please help us to SHARE this video by RATING it (the five little red and grey stars), COMMENTING, and SENDING to your friends and coworkers!

The Midwest is crawling with queers. Not because of any strong presence but in the more literal sense. Queers are crawling because we do not have the space to stand up. We do not have the resources that would enable us to live full, healthy lives. We, like so many others, are isolated in our homes, in our towns, controlled and confined by others, longing for life and being unable to live it.

I was born and raised in Cincinnati, Ohio. When I came out as trans I didn’t know anyone who was like me and I had no way of finding them. The city‘s “gay“ scene was practically extinct and no trans or queer scene it had never existed in the first place. There was no space for me, so I decided to try and make one.

I started a radical activist organization for trans and genderqueer issues, called GenderBloc , at my school, the University of Cincinnati. GenderBloc was not only the first trans-focused radical activist group to ever form at the school, it was the first in the region. Through GenderBloc I was able to create a space for, not only trans and genderqueer folks, but all the queers who didn’t fit into the LGB scene. I even was able to get gender identity and expression into the school’s non-discrimination policy. But GenderBloc didn’t have the strength or the resources to support anything more than the college community. When I graduated from college I founded The GenderQueer Coalition , a non-profit organization to serve not just the Cincinnati area but the entire Midwest genderqueer and trans community through education, community-building, advocacy, and wellness promotion. The purpose of the GenderQueer Coalition is to create access to resources that already exist, and to promote and support the creation of resources in communities that need them. Another goal is to fight for accessible, non-discriminatory health care for trans, genderqueer, and queer people- something that is very hard to find around here. I also created a blog called MidwestGenderQueer.com to promote visibility of our community with focus on Midwestern genderqueer and trans concerns.

When I look at the Midwest, I don’t see a rural waste land or hoards of bigots and conservatives. I see my home. My community is here, and it needs help. We queers are bound together by our marginalization from the rest of society. Anything we need: civil protections, employment and housing security, health care, education, community safe space… You name it, we don’t have it. What’s worse is that we ourselves have been taught to think we don’t need it. People seem to think that areas like the Midwest don’t need resources for queer people because there aren’t any here. But we are here. We’ve been here just as long as everyone else. So why hasn’t anyone gotten used to it?

This place needs a change. The only way to change things is to open our eyes, see the reality and the truth that surrounds us, and work to make it better. I don’t want to be afraid anymore. I don’t want my friends to be isolated. I don’t want our youth to grow up as outcasts. I want to be recognized as a member of this community. I want dependable, accessible health care. I want a connected network so we can educate others and support each other. I want to offer resources people can use, not regret that I can‘t do more. I want to be proud of where I came from.

I am a genderqueer living in the Midwest. This is my home and I am determined to make it better for my community. No one is going to do it for us. Raise yourself up so that others may follow.

4 thoughts on “GenderQueer in the Midwest” 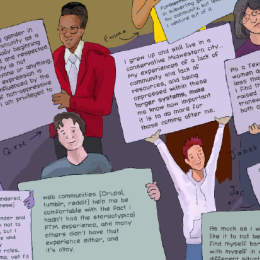 Check out The Gender Book‘s brand new site! It’s a great project and you might see some faces you recognize. ;) Related